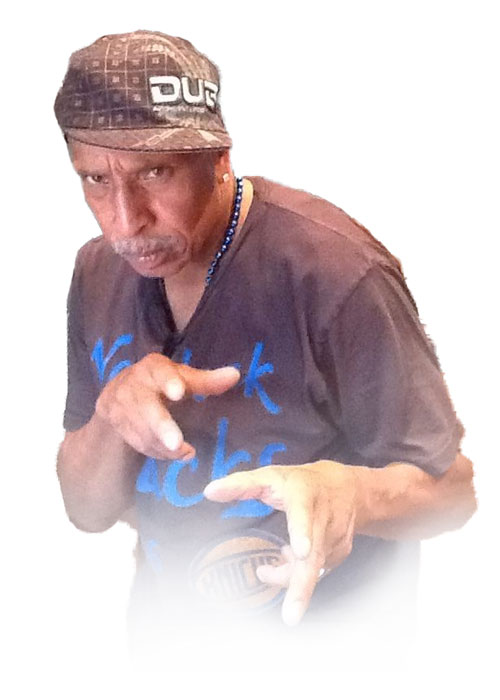 Victor Keith Edwards was born February 9th, 1955, to James T Edwards “Big Jim” and John D. Edwards “Johnny” in Akron, Ohio. He transitioned in the arms of his son Victor Lee Edwards and became our ancestor on February 8th, 2020. Victor is preceded in the next life by his parents, and brother Oliver D. Edwards.

Victor is known as of today “the Mack” spent the early part of his life as the youngest of the seven children who all grew up on Rhodes Avenue and Nathan St in Akron, Ohio. He was a natural handyman, he was a man of many hands of trades. He was amazingly artsy, crafty, and Godly talented. He was musically inclined will play drums, and the guitar like you wouldn’t believe and had a rhyme to flow well into those musical notes.

He was one of the many men from the city of Akron who painted murals in the downtown area of Akron, he was a professional commercial painter. He studied and graduated from South High School, receiving his degree in social work from The Ohio State University. He was a master jack of all trades, and he completed the mechanics training from The Columbus State.

Victor was a son, father, brother, the craziest, and fun-filled living uncle and friend to us all. A devoted man of having nothing but joy and determine to give a life full of laughter. If you knew of him, he had nicknames for everyone he touched. Victor was the man who created a security system, The Mack Nation or let’s say he had a unique way of being the protector for his family. He was happy about being a father, man the day was joyful when he found out he had a son, Victor Lee Edwards, and a daughter name Adoneka; these are his children. He was elated and committed about being a grandpa to his grandkids, being the sibling to his sisters and brothers. He honestly had a level of standards of happiness and being apart of a lovable family. A man of resilience, a man of his accountability, which he earned his name Urungu as we learned through his many years spent away, as he stated: “he had a bank job, and he had to make a deposit.”

As we have come to this day of celebrating Victor K. Edwards, I’m certain for we all can agree if we ask him what would you like for us to say about you, he would say “listen hear we ain’t got time for this madness, man turn on some funk, and let’s get funkafied, ya dig”! As he leaves us to cherish his legacy and who he joyfully and affectionately loves called his warden, sister Karen Taylor, his divorcee, sister Rhonda Edwards, His BK, sister Bridget Edwards, His Raphael, brother Phillip Edwards, his joy, Victor Lee Edwards, and his grandchildren Brenae Lee 16, Thomas Lee 10, Aveona Nicole 9, Laniya Lee 7, Kamya Lynn 6, Lilyonna Marie 5, Railway Grace 4.

He also leaves to cherish his long time best friend Bruce White, and host of his cousins, nieces, and nephews that he was affectionately crazy about.
Victor K. Edwards will be truly missed. He has gained his wings and will be with us no matter what. Victor was victorious as a true party animal and as he enters a new chapter of eternal living the hinges of the golden gates are being repaired by Victor, as he always felt he had to repair something to make his mark as he was a man who loves to build and repair.